Hello everyone! It’s been a long hard journey so far in developing our title, and we’ve received quite a lot of feedback along the way. One of the improvements that we will be rolling out is more innovative and unique classes. And because of the rapidly evolving sociopolitical climate, equalizing the playing field for players from all walks of life is becoming one of our priorities in the studio. The current ratio of female to male characters in our game is a staggering 100 : 0  … which is simply unacceptable!

Armor Blitz is proud to reveal our new upcoming class of weapon in the game, rockets and long range missiles! Since we have tank girls, we’re introducing powerful and handsome missile boys into the world of Factoria.

To start off, there are 3 new characters: the V-2 Rocket, V1 Flying Bomb (Doodlebug), and the R-1 Missile.

Unlike other traditional vehicles, these characters are activated similar to abilities. Select your target and the character will fire their projectile directly at the target. Their missiles will penetrate through enemy lines and deliver their long range arsenal directly to the enemy commanders in a devastating explosion!

The ramifications of this update are huge: first of all, we will have a fresh source of testosterone on the world of Factoria, something that the world has been severely lacking.  Second, it let’s us venture into a whole new world of character archetypes, that will bring us closer than ever to our anime influences. Archetypes such as:

This is only the beginning of the future of Armor Blitz. We will continue to keep bringing in more of these male units until we hit a satisfactory ratio of 50:50 female to male characters. I hope everyone is happy with these changes moving forward. Us here in the Armor Blitz Team see this as a vital step towards bringing true balance to the game.

You’ve probably noticed this by now, but there was a mysterious absence of news posts in the last month! We’re sorry about the absence on our blog, but hopefully you’ve been able to keep up with our new art reveals on Facebook or Twitter. Our team was very busy transitioning into a new work environment and taking feedback from our first stage of closed alpha testing. We’ve gotten quite a lot of feedback, and after we fix the crucial bugs and issues, we will roll out another wave of invites.

Despite your best impressions, the team creating Armor Blitz is partially made up of students and April was final exam time. That is the biggest reason for the temporary slow down in patches and the missing blog post! However, now that summer has arrived, we’ll be working full-time and rolling out features at unreal speeds. I hope you guys are ready… because there are some huge changes coming to our UI (Army Screen + Factory interactions were poorly optimized), as well as alterations to the combat visuals. Our goal is to make things clearer for the player and more interactive than it is now.

Oh – and we have a lot of bugs to fix. Thank you to all of you who hammered away at our game and made sure our alpha build was torn apart. It’s all part of the development cycle!

Although our programming was slow, that didn’t slow down our art progression. We’ve been getting a lot of reworks done to bring our older characters up to par. I’m sure you can take an educated guess on this one.

(Usually we show the armament… but the head is just fine in this case!)

One of the things we’ve been super proud of is the spectacular displays of artistry that fans and artists have conjured up. Take a look at some of the following creations that were inspired from our lovely Armor Blitz characters — and keep the creative juices flowing! 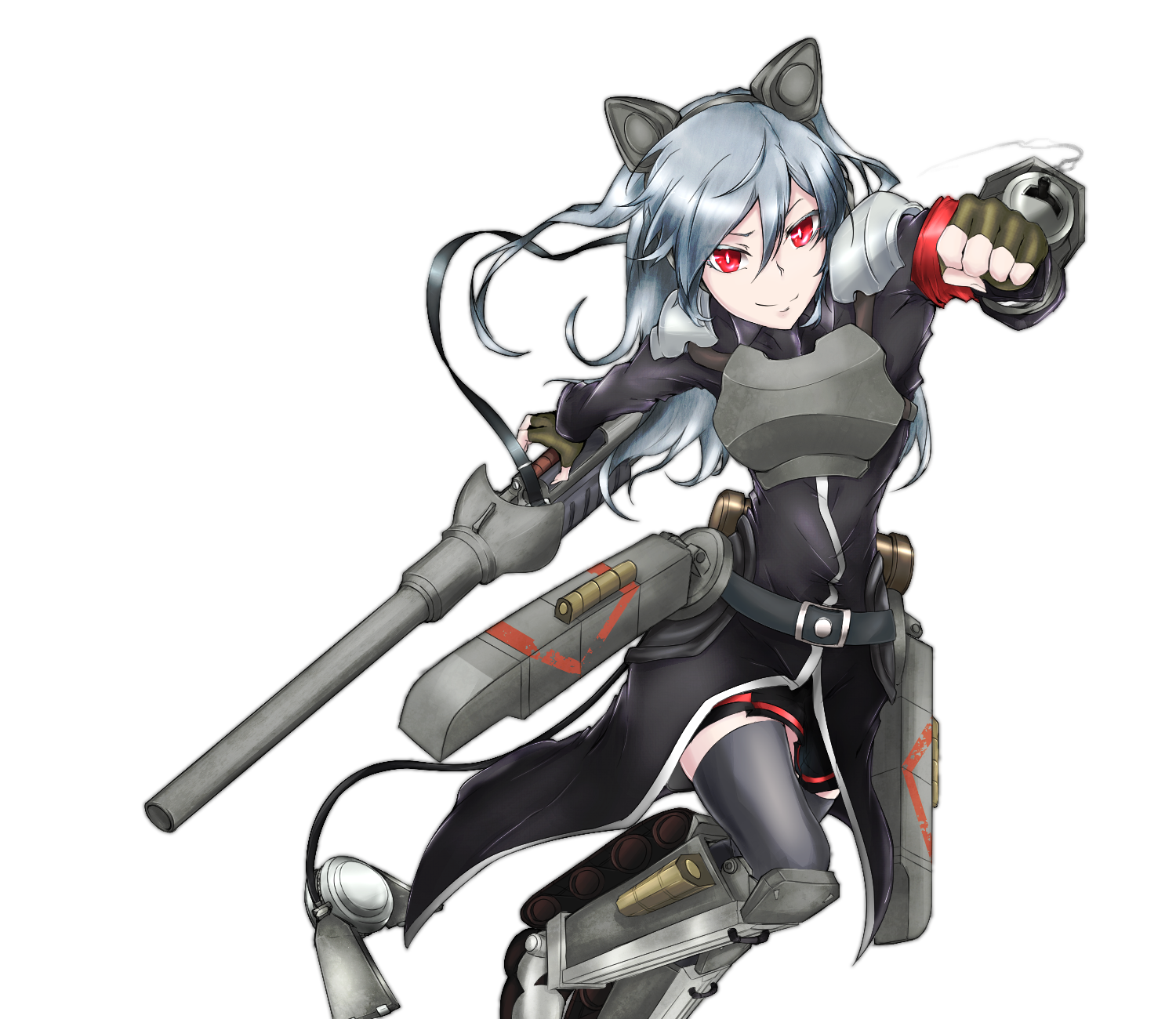 Matilda II under fire by Shirohtakashiya

We were stunned to see this Panzer IV cosplay from our fan, Alex. Thanks for letting us share!

That’s all for now. Stay tuned, and keep Blitzing!

This update is a few days late, so apologies for that. Some of you have noticed that we’ve been sort of slow in updates, and that’s because of how busy we’ve been! Because of our scheduled alpha testing date, we need to have a public build ready, and that means doing lots of clean up work to make sure the game is playable for non-developers. If you’ve seen other games’ dev builds… they can be pretty messy! In this letter, we’ll recap everything from the past month along with our plans for the future.

Last month we put out the third Armor Blitz Adventures comic featuring the Thor and her chuunibyou aspirations. She read about all the powers of the mighty Norse god, and thinks she can handle it too! If you haven’t seen it yet, go here!

There have also been a few redraws of old characters, done by Tenmuki. It’s a pleasure to have her on the team! The changes are a huge improvement for each character. You may not know this, but all of our old characters had no feet! Their art ended above the knee, so it could fit into the card. Nowadays, we make sure to create the full body even if it’s not needed in the game. It gives us more versatility and looks better outside of the game. Here’s a comparison to see how they’ve changed!

We will continue to slowly redo some of our older arts with better ones. Out with the old, and in with the new!

So I mentioned that the programming was our biggest hurdle right now. Some of the things we are currently developing include:

In addition to those, we are constantly squashing bugs as always. In the coding world, there’s a saying that when you fix one bug, something else  breaks. It’s not THAT bad… but there is some merit in that statement.

As you can tell, there’s a lot on our plates. In terms of business stuff, we did hit a huge milestone of officially incorporating! So we are an actual business under the eyes of American law – so official! Plenty of paperwork to sign there, but it’s important so that we as a team can continue to grow and make games under the Gaudium company name. We’re still the same old team of 5 volunteers, but with a much brighter future ahead.

Like mentioned in February’s update, we’re trying to get a closed alpha build done by the third week of March… that’s very soon! It will just be a small handful of random picks from our mailing list, and some of the fans that have followed our project the longest. You will get personal instructions on how to help on March 21st!

Until next time, keep cheering us on!

Here’s another progress update for the month of February. It’s super exciting to know that our email list has grown a lot since the last update, so if you’re getting this in your inbox – welcome! We’ve got a few things to share from the past month, although most of it has been related to business (paperwork, trademark filing, incorporation). That’s boring, so we’ll cut to the chase starting with our new series of comics that kicked off in January!

If you’ve been following our social media, you have probably seen the little 4koma style comic strips. This is something that we have lots of fun making, and each strip really fills out the personality of our characters. The reception has been great so far, so we’ll keep working hard to make more. Here’s a teaser for the next one: LIGHTNING! Expect to see that one done in ~2 weeks time.

There’s also a new section on our blog here called Adventures! That will be the archive for each of our Armor Blitz Adventures pieces if you need to catch up on the previous ones.

Another cool thing that happened in January is a new musical piece commissioned by the lovely Phyrnna! If you haven’t listened to it yet, get excited.

Some things were broken… so we fixed them

Just like the subheading says, we were having a weird bug with save data being lost. Our internal testing had slowed down greatly as a result (among other reasons). Obviously that’s not what we want, so that should be resolved now! Our main goal right now is to complete the networking features like analytics monitoring and online interaction.

On a positive note, our first iteration of optimization is complete (asset bundling). It’s a progressive thing, so of course the task is more long term, but loading speed is a lot better now! One of the other things we need to do to reduce filesize is programmatic cropping of cards. We have various sizes (small, large, extra large) for portraits. Having each of these not only takes extra steps to produce, but it also increases overall file size by a lot. Our goal is to come up with an algorithm to chop out the parts we need, when we need it.

Last time I sent out a letter to everyone, I did promise news on our public alpha build. Because of some of the problems listed in this post, we had gotten stuck on progression. Also, all of our members are part-time volunteers/students, so depending on work schedule we only have limited hours in the day. Although we can’t talk about everything going on behind the scenes, our team is doing TONS of stuff to make the project a success. With that in mind, our goal is:

Public Alpha test in the third week of March.

And because Feb. 14th is rolling around… Happy early Valentines day! We love you all <3

To improve on the aesthetic design for the game, our team has been playing around with different shader materials. Originally, we were playing with the default Diffuse and Toon shaders in Unity. While the toon shader made the character look brighter, it still gave off an extremely flat look for the game while the diffuse made the character look a bit too dull in the game. With our new unit shader, characters now have a slight flowing highlight on the edges and a small outline.

For the face, we employ a different shader to make the skin less reflective and more smooth. These small changes help make the character look a lot more vibrant!